Over several months I worked with the artist Jimmy Cauty, formally of the band ‘The KLF’, building a large 448 ft sq diorama inspired by the London riots.

During this time I worked with a small team of model makers and was involved in most aspects of the building process including sculpting the landscape, constructing many of the buildings and helping with the wiring of the lights and speaker systems.

This Perspex tree was built for a Lipton Tea commercial and was made at "Artem". Much of the tree was made in laser cut sections which were then bolted onto a steel frame. We were also asked to build three large presses which would be filled with fresh tea leaves
During the filming, tea would be pumped into its roots using the large presses, which then flowed up through the branches and dripped from the perspex leaves at the top.

Working in the costume and props department, I was involved with making many of the hard elements of the costumes such as shoulder pads, gauntlets and boots.

I was also involved with fitting many of the perspex domes used in the helmets.

Overall Around 60 spacesuits were needed during the filming of Prometheus. These included spares for the actors and their body doubles as well as certain suits which were used during various stunts.

A mouse and his child

This was a costume made at JagProps for a production at the Royal Shakespeare Company.
The wearer would put their arms through the two large windows either side and look through the large circular window at the front.
The costume needed to be flexible and light so main body was made of Plastazote sheets stuck together using evo-stick. The doors and windows were then made using styrene which then slotted into holes cut in the foam.

The Horn Of Quintus

This prop I'm currently working on is based on an item from the pc game "Thief: the dark project".

The horn has been shaped using balsa foam and has then been sculpted onto using an epoxy putty. Eventually the horn will be moulded and cast in resin so that the piece is hollow.

This was a piece I did at University and was based on the character "Calibretto" from the comic Battle Chasers. It was originally commissioned by a comic shop and was displayed in their shop window.

Whilst working at Artem, I was involved in building this large head which was used in the 2012 Olympic opening ceremony.

Whilst work at Hothouse, I was involved in creating this window display along with various set pieces for the Selfridges Christmas grotto.

This was another piece made at Hothouse and was built as part of London Fashion Week for Kellogg's. 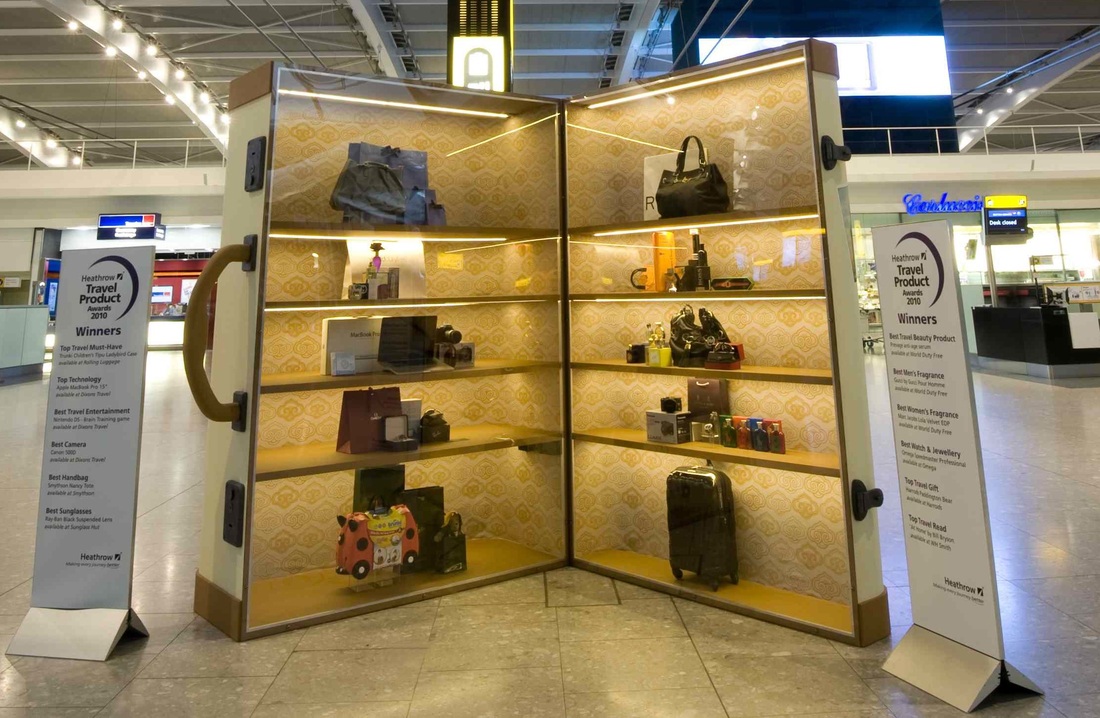 This large suit case was built as part of the Heathrow travel product awards at Hothouse.  It was used to showcase the winners and was displayed at terminal 5 in Heathrow Airport.
Powered by